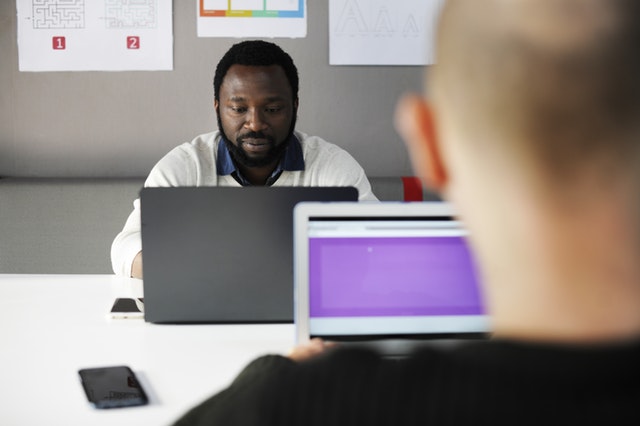 Tremayne Stewart took a sick day on the last Friday in May. Instead of logging in to work like he typically would, the YouTube software engineer grabbed a poster and joined a contingent of demonstrators in Oakland to protest the death of George Floyd.

He spent the weekend watching the news and scrolling through social media, all the while jumping through different emotions: anger, frustration, hopefulness then despair. On Monday, he plastered on a happy face and began his work from home. There was little acknowledgment from his direct management chain of the ongoing social upheaval, nor did his colleagues reach out to him about the protests that transpired across the country.

“I had to act like it was business as usual. I was going to team meetings but I didn’t care about the work,” Stewart says. “As a software engineer, I have to deal with a lot of complexity in my head. There’s no space for complexity when there are other things in the back of your mind.”

He lasted half the day before calling it quits. “I just had to log off and regroup,” he says.

Stewart’s experience mirrors that of many black professionals in corporate America who, amid a pandemic that has exacerbated racial inequities and created financial duress, must now deal with the emotional trauma of seeing more black bodies killed at the hands of police officers and vigilantes.

Most Popular In: Diversity & Inclusion

LGBT+ Pride Comes To Animal Crossing: Get Pride Tshirts, Flags And Furniture On Your Island
Dear Companies: Your BLM Posts Are Cute But We Want To See Policy Change
Companies Are Using Juneteenth To Show Black Employees That They Matter
This weight leaves black workers in a quandary, one in which they’re shedding tears offline, then forcing an air of joviality and lightheartedness in video meetings and on work calls.

In recent years, business leaders have championed bringing one’s whole self to work, calling on their employees to show up authentically. But Stewart says that if black people were really to bring their authentic selves to work this week, “they wouldn’t even bother coming in because they’d be mopey, depressed and greatly drop the morale of the entire company.”

For Nikki Kria, a member of Twitter’s communications team, acknowledgment from white colleagues and company leaders hasn’t been an issue. Twitter permitted employees to take time off if needed and provided a forum for company-wide discussions, where Kria was surprised to hear coworkers openly name and reflect on victims like Floyd. “I feel more encouraged now than I ever have in other work environments to feel okay with not being okay,” Kria says.

But garnering the energy to respond to all of the outreach from colleagues has only added to her exhaustion. “I just might not be in the mood to have a conversation about it,” she says. “I’m still processing all this myself—thinking of the George Floyd images across social media still makes me nauseous.”

Twitter Blackbirds, the company’s employee resource group for people of color, has offered her comfort and support, as well as a space where there’s no pressure to discuss how surrounding events are affecting her. “People really underestimate the importance of sharing a culture. Not having to explain the things that are culturally important to you right now is really significant,” she says.

However, these moments of reprieve don’t last very long, and given the outsize role she plays in helping Twitter connect with black consumers, she finds herself quickly donning her work hat again.

Like Kria, SpaceX software engineer Marc Julien has found some solace at work. While demonstrators took to the streets to protest against racism on May 30, SpaceX launched its first crewed mission, heralding a new era of human spaceflight.

“Being involved with the launch was good for me because I could bury myself in work and then see it take off,” he says. But once Monday rolled around, Julien, who says he’s typically not emotional, felt drained.

“Seeing black people die has become the norm, so I’ve developed coping mechanisms and learned how to balance what’s going on outside with my work,” he says. Still, he found it difficult to focus on work that Monday, noting that he wasn’t as productive as he normally is. “I didn’t work as much that day and tried to take a bit of time for myself.”

At ESSENCE, a magazine with a predominantly black staff, assistant fashion features editor Nandi Howard is grateful that her colleagues naturally understand what she’s experiencing. ESSENCE has weekly wellness checks year-round wherein managers conduct one-on-ones with their team, Howard says. But the company also recently began to host open forums for staffers to reflect on the state of the world as well as morning prayer sessions, led by leaders including Essence Ventures founder and chairman Richelieu Dennis.

“I have not wanted to work, honestly, it has been tough,” Howard says. But she takes comfort in the fact that even if she does take a break, white-owned media outlets are spotlighting black people during this time.

Howard has also leveraged her social media platform as means for protest, using it to advocate for white and non-black allyship. Late last month, she called out top fashion brands for failing to acknowledge racial injustice. While the act “raised eyebrows at ESSENCE,” she says, “they heard me, they listened to me and they supported me.”

A chorus of business leaders has spoken out against bigotry and injustice in the wake of Floyd’s death. YouTube executives encouraged employees to take off work on Tuesday in solidarity with protestors, while SpaceX president and COO Gwynne Shotwell encouraged staffers to “take the time you need” in an email to employees.

“Companies are starting to overcome their cultural paralysis because they realize that silence can be perceived as apathy,” says Lanaya Irvin, president of the Center for Talent Innovation, a nonprofit group that focuses on advancing workplace diversity.

Business leaders like Citigroup CFO Mark Mason and Merck CEO Kenneth Frazier have also publicly condemned systemic racism. But as black executives, they find themselves in a unique predicament: On one hand, their organization looks to them for direction and guidance. On the other hand, they are experiencing the psychological toll of racism themselves.

“Our [black] community is exhausted,” Irvin says. “And our teams are coming into the workplace holding pain and holding the weight of what they’re watching and observing.”

As a black woman in a leadership role, she says that she often encourages her team to have difficult conversations about race. And although a leader’s first instinct is to push their own feelings aside, Irvin says, black managers aren’t exempt from the emotional trauma of racism.

“Without me exposing a bit of vulnerability, lifting the veil and opening space for dialogue, my team might not do the same,” she says. “There’s been an awakening in corporate America and this is really an inflection point.”